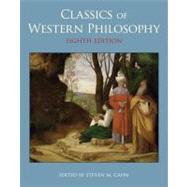 The 8th edition of Classics of Western Philosophy trumps the 7th edition¿as well as all competing anthologies¿by including Plato¿s Laches, selections from Aristotle¿s Nicomachean Ethics (on courage), Descartes¿ Discourse on Method, the remainder of Berkeley¿s Treatise Concerning the Principles of Human Knowledge, and the whole of Kant¿s Prolegomena, all in preeminent translations. These additions¿with no offsetting deletions¿yield an anthology of unprecedented versatility, making it the only volume of its kind to offer both Descartes¿ Discourse on Method and Meditations on First Philosophy; Berkeley¿s A Treatise Concerning Principles of Human Knowledge and Three Dialogues; and Kant¿s Prolegomena and selections from the Critique of Pure Reason.
What is included with this book?