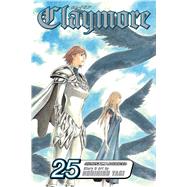 Three battles unfold around the holy city of Rabona as demonic forces seek to destroy one another, the rebel Claymores and the city itself. Seemingly intent on devouring all life, monsters of unprecedented strength rage on as the rebels struggle to contain them. Could the cause of this rage lie in a distant childhood memory?
Norihiro Yagi won the 32nd Akatsuka Award for his debut work, UNDEADMAN, which appeared in Monthly Shonen Jump magazine and produced two sequels. His first serialized manga was his comedy Angel Densetsu (Angel Legend), which appeared in Monthly Shonen Jump from 1992 to 2000. His epic saga, Claymore, is running in Monthly Jump Square magazine.
What is included with this book?