The Clink of the Ice And Other Poems Worth Reading 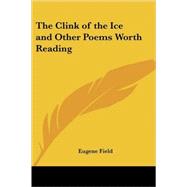