The Complete Calvin and Hobbes 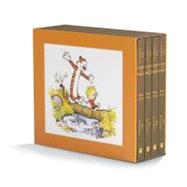 New York Timesbest-seller! "From 1985 until Watterson abandoned it at the height of its popularity 10 years later, Calvin and Hobbesechoed the classic strips the artist most admired. Stirring the richly conceived characters and efficient drawing of Peanutswith the visual virtuosity and linguistic playfulness of Pogoand Krazy Kat, he applied his intelligence and supple cartoon skills to come up with a creation beloved by the millions who still mourn its passing. Now, a decade after his demise, six-year-old Calvin has a fitting monument-a lavishly produced . . . boxed collection of all the strips." -Art Spiegleman, starred review, Publishers Weekly "Watterson's imaginative approach to his material and his inventive graphics have made Calvin and Hobbesone of the few universally admired by other cartoonists." --Charles Solomon, Los Angeles Times Book Review Calvin and Hobbesis unquestionably one of the most popular comic strips of all time. The imaginative world of a boy and his real-only-to-him tiger was first syndicated in 1985 and appeared in more than 2,400 newspapers when Bill Watterson retired on January 1, 1996. The entire body of Calvin and Hobbescartoons was originally published in hardcover as a truly noteworthy tribute to this singular cartoon in The Complete Calvin and Hobbes. Available for the first time in paperback, these four full-color volumes in a sturdy slipcase include all the Calvin and Hobbescartoons that ever appeared in syndication. This is the treasure that all Calvin and Hobbesfans seek.
Bill Watterson is the creator of Calvin and Hobbes, one of the most popular and well-regarded cartoon strips of the twentieth century. Calvin and Hobbes appeared in newspapers from November 1985 until Watterson's retirement in 1996.