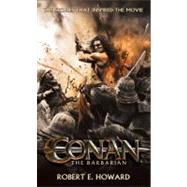 THE CLASSIC STORIES THAT INSPIRED THE BLOCKBUSTER FILM Conan the Barbarian is one of the greatest fictional heroes ever created-a swordsman who cuts a swath across the lands of the Hyborian Age, annihilating powerful sorcerers, deadly creatures, and whole armies of ruthless foes. Today his name is synonymous with the epic battles of ancient times, but Conan originated in the early decades of the twentieth century with one of the founding fathers of fantasy, the visionary Robert E. Howard. The unforgettable stories collected here form a thrilling adventure, following Conan from his mercenary youth to his bloody conquests on the frontier and even the high seas. Bold and enduring, the legend of Conan the Barbarian continues to grow in popularity and influence.
Robert E. Howard is one of the most prolific short story writers in American history, and has created such beloved characters as Conan the Barbarian, Kull of Atlantis, Soloman Kane, Bran Mak Morn, El Borak, and Dark Agnès de Chastillon. He tragically passed away in 1936.
What is included with this book?