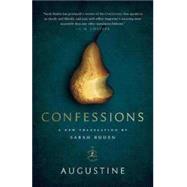 One of the great works of Western literature, from perhaps the most important thinker of Christian antiquity, in a revolutionary new translation by one of today’s leading classicists

Sarah Ruden’s fresh, dynamic translation of Confessions brings us closer to Augustine’s intent than any previous version. It puts a glaring spotlight on the life of one individual to show how all lives have meaning that is universal and eternal.

In this intensely personal narrative, Augustine tells the story of his sinful youth and his conversion to Christianity. He describes his ascent from a humble farm in North Africa to a prestigious post in the Roman Imperial capital of Milan, his struggle against his own overpowering sexuality, his renunciation of secular ambition and marriage, and the recovery of the faith his mother had taught him during his earliest years. Augustine’s concerns are often strikingly contemporary, and the confessional mode he invented can be seen everywhere in writing today.

Grounded in her command of Latin as it was written and spoken in the ancient world, Sarah Ruden’s translation is a bold departure from its predecessors—and the most historically accurate translation ever. Stylistically beautiful, with no concessions made to suit later theology and ritual, Ruden’s rendition will give readers a startling and illuminating new perspective on one of the central texts of Christianity.

“[Ruden] has clearly thought deeply about what Augustine was trying to say.”—The Wall Street Journal

“A translation of [Augustine’s] masterwork that does justice both to him and to his God . . . Repeated small acts of attention to the humble, human roots of Augustine’s imagery of his relations to God enable Ruden to convey a living sense of the Being before Whom we find him transfixed in prayer: ‘Silent, long-suffering and with so much mercy in your heart.’”—The New York Review of Books

“Delightfully readable . . . In this lively translation filled with vivid, personal prose, Ruden introduces readers to a saint whom many will realize they only thought they knew. . . . Approaching her subject with deep religious and historical knowledge, [Ruden] chooses to translate Augustine as a performative, engaging storyteller rather than a systematic theologian.”—Publishers Weekly (starred review)

“Ruden’s translation makes Augustine’s ancient text accessible to a new generation of readers with a real taste of the original Latin.”—Library Journal

“[Ruden’s] record as a translator of ancient texts . . . clearly establishes her considerable talent.”—Christianity Today
Sarah Ruden was educated at the University of Michigan, Johns Hopkins, and Harvard, from which she graduated with a Ph.D. in classical philology. She has translated six books of classical literature, including Lysistrata, The Golden Ass, and The Aeneid, and has also translated Aeschylus’s Oresteia for the Modern Library collection The Greek Plays. Her translation of Augustine’s Confessions is her first book-length translation of sacred literature. Her articles have appeared in The Wall Street Journal, Books & Culture, and other magazines. She is a winner of a Guggenheim fellowship and a Whiting Creative Nonfiction Grant, and is the author of Paul Among the People: The Apostle Reinterpreted and Reimagined in His Own Time and The Face of Water: A Translator on Beauty and Meaning in the Bible, as well as a book of poetry, Other Places. Ruden is a visiting scholar at Brown University and lives in Hamden, Connecticut.