The Conscience of the Constitution 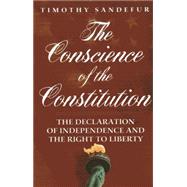 "Now the nation no longer lacks what it has long needed, a slender book that lucidly explains the intensity of conservatism's disagreements with progressivism. For the many Americans who are puzzled and dismayed by the heatedness of political argument today, the message of Timothy Sandefur's The Conscience of the Constitution: The Declaration of Independence and the Right to Liberty is this: The temperature of today's politics is commensurate to the stakes of today's argument." -- George Will, The Washington Post

Now in paperback, this book provides a dramatic new challenge to the status quo of constitutional law and argues a vital truth: our Constitution was written not to empower democracy, but to secure liberty. Yet the overemphasis on democracy by today's legal community has helped expand the scope of government power at the expense of individual rights. Now, more than ever, the Declaration of Independence should be the framework for interpreting our fundamental law. It is the conscience of the Constitution.
Timothy Sandefur is a staff attorney at the Pacific Legal Foundation and lives in Rescue, California.