Continuity and Change in Contemporary Capitalism 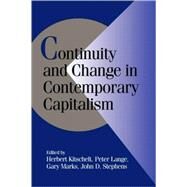 In the early 1980s, many observers, argued that powerful organized economic interests and social democratic parties created successful mixed economies promoting economic growth, full employment, and a modicum of social equality. The present book assembles scholars with formidable expertise in the study of advanced capitalist politics and political economy to reexamine this account from the vantage point of the second half of the 1990s. The authors find that the conventional wisdom no longer adequately reflects the political and economic realities. Advanced democracies have responded in path-dependent fashion to such novel challenges as technological change, intensifying international competition, new social conflict, and the erosion of established patterns of political mobilization. The book rejects, however, the currently widespread expectation that 'internationalization' makes all democracies converge on similar political and economic institutions and power relations. Diversity among capitalist democracies persists, though in a different fashion than in the 'Golden Age' of rapid economic growth after World War II.
What is included with this book?