The Cretan Runner His story of the German Occupation 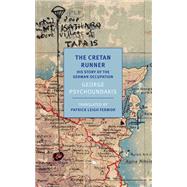 George Psychoundakis was a twenty-one-year-old shepherd from the village of Asi Gonia when the battle of Crete began: “It was in May 1941 that, all of a sudden, high in the sky, we heard the drone of many aeroplanes growing steadily closer.” The German parachutists soon outnumbered the British troops who were forced first to retreat, then to evacuate, before Crete fell to the Germans. So began the Cretan Resistance and the young shepherd’s career as a wartime runner. In this unique account of the Resistance, Psychoundakis records the daily life of his fellow Cretans, his treacherous journeys on foot from the eastern White Mountains to the western slopes of Mount Ida to transmit messages and transport goods, and his enduring friendships with British officers (like his eventual translator Patrick Leigh Fermor) whose missions he helped to carry out with unflagging courage, energy, and good humor.

Includes thirty-two black-and-white photographs and a map.
George Psychoundakis (1920–2006) was born and raised in the remote Cretan village of Asi Gonia, where he received a rudimentary education. When the German army invaded in 1941, he left his work as a shepherd and joined the Resistance. He would eventually run messages for the British Special Operations Executive, and was noted for his speed and intimacy with the landscape. After the war he was mistakenly imprisoned as a deserter and began writing what would become The Cretan Runner (published in English in 1955 and in Greek in 1986) while in prison. In addition to his memoir, Psychoundakis wrote The Eagle’s Nest, a study of the customs of Cretan mountain dwellers, and translated works by Hesiod and Homer into the Cretan language. In 1945 Psychoundakis received the Medal of the Order of the British Empire for Meritorious Service, and in 1981 he was recognized by the Academy of Athens for his translations. He lived on Crete, with his wife and three children, until the end of his life.

Patrick Leigh Fermor (1915–2011) chronicled his youthful walk across Europe to Constantinople in a trilogy comprising A Time of Gifts, Between the Woods and the Water, and The Broken Road. After serving on Crete during World War II, Leigh Fermor settled in Greece and his books Mani and Roumeli attest to his deep love for the country. In 2004 he was knighted for his services to literature and to British–Greek relations.
What is included with this book?