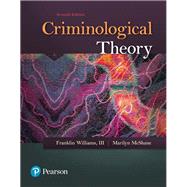 The authoritative resource for concise, chronological coverage of all the major sociological criminological theories

This book provides all of the key principles of the most researched theories in the field of criminology in a concise, clearly written, and economical format. For over 30 years Williams and McShanes Criminological Theory has been one of the most well-respected resources for undergraduate and graduate students nationwide, much appreciated for its strong research orientation and detailed research bibliographies that show the relationship between theory, research, and policy. Chapters are logically arranged with the social, cultural, and political context necessary to maximize understanding of the times that generated and supported the various theories presented. The book provides a chronological map tracing the development of each theory in relation to its predecessors and its role in the evolution of future theories. Each chapter ties into the preceding and subsequent chapter, making the theories that are meaningful to criminology today more cohesive. As a result, by understanding the relationship between early and present theory, students see the role played by the theorist more realistically, and can see themselves participating in theory as others before them have done.

Frank P. Williams III is Professor Emeritus, California State University-San Bernardino and a Fellow of the Academy of Criminal Justice Sciences. He has published a number of articles, research monographs, encyclopedias, and books in areas ranging from criminological theory to correctional management.  His books include Statistical Concepts for Criminal Justice and Criminology (Prentice Hall, 2008) and Imagining Criminology (Taylor & Francis, 1999), and he is co-author of A Thesis Resource Guide for Criminology and Criminal Justice (Prentice Hall, 2008), and the three-volume edited set Youth Violence and Delinquency: Monsters and Myths (Praeger, 2008).

Marilyn D. McShane was formerly a professor of criminal justice at the University of Houston-Downtown.  She has been co-principal investigator in a number of correctional research grants and her published work includes journal articles, monographs, encyclopedias and books on a wide range of criminological and criminal justice subjects. Recent materials she has authored, coauthored and edited include: Women and Criminal Justice (Aspen Publishers, 2014); Criminological Theory, 6th Edition (Pearson, 2014); A Thesis Resource Guide for Criminology and Criminal Justice (Prentice Hall, 2008); Understanding Juvenile Justice and Delinquency (Praeger, 2016); and American Victimology (LFB Scholarly Publishing, 2011).

Section I: THE ROOTS OF CRIMINOLOGY

Section III: BUILDING ON THE FOUNDATION