The Crisis of Parliamentary Democracy 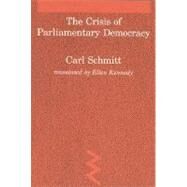 Described both as "the Hobbes of our age" and as "the philosophical godfather of Nazism," Carl Schmitt was a brilliant and controversial political theorist whose doctrine of political leadership and critique of liberal democratic ideals distinguish him as one of the most original contributors to modern political theory. The Crisis of Parliamentary Democracy offers a powerful criticism of the inconsistencies of representative democracy. First published in 1923, it has often been viewed as an attempt to destroy parliamentarism; in fact, it was Schmitt's attempt to defend the Weimar constitution. The introduction to this new translation places the book in proper historical context and provides a useful guide to several aspects of Weimar political culture. The Crisis of Parliamentary Democracyis included in the series Studies in Contemporary German Social Thought, edited by Thomas McCarthy.
What is included with this book?