The Damned and the Destroyed 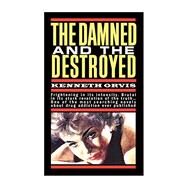 Maxwell Dent studied law at McGill and served in the RCAF and Intelligence M-5 during the Korean War. For a private investigator, he’s as respectable as they come. No wonder then he's summoned to Huntley Ashton's Westmount mansion. A respected captain of industry, the wealthy man knows the PI can be relied upon to be discreet. Ashton’s daughter Helen has fallen into heroin addiction, and the millionaire wants Dent to smash the ring supplying her vice, just as he took down a ring operating in Korea. Set in 1954, the novel captures the dying days of the era in which Montreal had the reputation as one of the world’s great sin cities. The Damned and the Destroyed was originally published in 1962 by McClelland & Stewart in Canada and Dennis Dobson in the UK; this Ricochet Books edition marks the first print edition in more than five decades.
Brian Busby is the author of several books, most recently The Dusty Bookcase: A Journey Through Canada’s Forgotten, Neglected, and Suppressed Writing. He is the Ricochet Books series editor. Kenneth Orvis is the pen name of Montreal-born thriller writer Kenneth Lemieux. His other books include Hickory House (1956), Night Without Darkness (1965), Cry Hallelujah! (1970), Into a Dark Mirror (1971), The Disinherited (1974), The Doomsday List (1974), and the memoir Over and Under the Table: The Anatomy of an Alcoholic (1985).
What is included with this book?