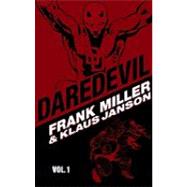 A classic Marvel hero defined by one of comics' greatest visionaries! A Marvel Comics mainstay since 1964, Daredevil got a new lease on life in a landmark 1979-1983 run by writer-penciler Frank Miller and inker-penciler Klaus Janson, whose daring reinvention of the character quickly made Miller one of the biggest and most influential stars in the comic-book industry. Miller put his own stamp on established cast members such as reporter Ben Urich, femme fatale Black Widow, mad assassin Bullseye, the saw-fisted Gladiator, and monstrous crime boss Kingpin. Miller also introduced Daredevil's mysterious mentor Stick, deadly ninja foes the Hand, and Matt's long-lost love Elektra, a beautiful assassin who would become one of Marvel's most memorable characters. Mixing traditional super-heroics with mysterious martial artistry, doomed romance, and dark personal drama, Miller's character-defining DD run is collected across three titanic trade paperbacks! Collecting Peter Parker, the Spectacular Spider-Man #27-28, and Daredevil #158-161 and #163-172.
What is included with this book?