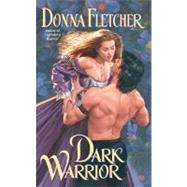 Mary wakes in the darkness of a dungeon after being abducted by a fearsome warrior. Suddenly her prison door opens to reveal a large man hidden in black shroud. He calls himself Michael, the Dark One. As a favour to his friend Magnus (from Legendary Warrior), Michael has come to rescue her. They travel across unknown territory seeking safety, and Mary falls in love with Michael's strength and kindness. But when they finally reach the protection of Magnus's home, it is to find that the warrior who had first abducted her has issued a decree: wed him, or the innocent villagers will die. Mary now must choose between her love for Michael and the lives of innocent people. Will Michael be able to save her again...or will a dark secret destroy them both?
Part of the fun in writing, Donna Fletcher admits, is doing the research. Getting lost in 1514 proved exciting, and learning about pirates and the high seas thrilled and surprised her. But it is with her characters she has the most fun. She loves giving life to fresh characters and feels their excitement as they face the pleasures and pitfalls of falling in love. Donna's own adventures have taken her to England, Ireland, and Scotland. She has walked the fields where battles were fought centuries ago, toured haunted castles, stood where beheadings were commonplace, explored the mystic mounds of long ago, and collected a plethora of memories and research that will live long in her heart and mind. She also loves exploring and photographing old abandoned homes, and she often takes long walks in the woods with camera in hand. She feels her life is rich and full, having three terrific sons, two fantastic daughters-in-law, an endless supply of friends, a loving dog, and a crazy black, one-eyed cat named Bear. Donna loves hearing from her readers. Please visit her at www.donnafletcher.com.
Dark Warrior

Mary ran for her life in woods that once offeredsanctuary.

Low-hanging branches scratched at her arms in anattempt to impede the escape, and familiar tall trees becameas angry sentinels blocking her at every twist andturn. Gray storm clouds rushed overhead, keeping pacewith her; a fine mist of rain fell, dampening the linenshift and tunic she wore. Her soft leather boots crushedthe fresh spring growth as she tried to increase the distancefrom her pursuers.

Their angry warning shouts were meant to frightenher, but she did not think she could be any more frightened;she had been running for the last ten years.

The ground trembled from the pounding of runningfeet as they gained on her. She hastened, but the rapid pace brought on a growing fatigue that soon would impedeher flight.

Do not turn around. Keep running.

The pursuers taunted her with their laughter, playingwith her, letting her know they were so very close tocapturing her. She refused to let them intimidate herand refused to surrender. She would run until shebreathed her last breath.

Her determination gave her renewed speed; sheheard a string of violent oaths spewed from behind asshe moved beyond their reach.

The wet ground made her footing difficult. Sheslipped and righted herself, but not quickly enough.

Hands suddenly shoved at her back and she tumbledface-forward to the ground, her breath knockedcompletely out of her. Given no time to regain hersenses, the man roughly turned her onto her back,straddling her and grabbing her neck in his large,thick hand.

"Run from me will you?" He snarled between pantedbreaths, sounding like an enraged animal about to tearhis prey to pieces. "You’re not going anywhere. Decimuswants you."

Mary grabbed at his hand, fear racing through her. Hewas choking her; she could not breath. She pulled andclawed at his wrist, his arm, but he squeezed evenharder. Her vision blurred, shouts sounded around them.

She struggled and fought, and knew she was dying.

Mary woke with a start, her hand going immediatelyto her neck. She cringed from the pain. Total darknesssurrounded her, and she curled up into herself in thetiny prison cell.

It had been a full day since her capture, at least shethought it had been. Being deprived of light made forthe absence of time. It was as if darkness was a voidwhere time did not exist or matter.

She gently moved her fingers over her neck, determiningthat it was bruised nearly from ear to ear. Shehad attempted to give answers demanded of her captors’questions after the strangling ceased, but her throatwas so pained that speech was barely possible.

This angered them even more, and the one who hadchoked her shoved her in disgust to the wet ground. Shewas already wet and muddied; this only added to hermiserable condition. And now she sat in a cell, the mudhaving dried and caked on her garments, in her longblond hair, streaking her face. She knew she must looka sight.

She laughed softly. What did her appearance matter?She sat alone in the dark cell, her life in danger. Herthoughts should be on more important matters, but thenwhat chance was there for her to escape? And being released?She shook her head at the absurdity of thewishful thought.

A faint noise in the corner of the cell caught her attention.She listened as the scurrying of tiny feet rustledthe straw serving as the cell’s floor-covering. Nodoubt mice or rats looking for a morsel of food. Shetapped her feet together to frighten the rodents off. Sheheard an anxious scurry of feet and then sudden silence.They had made their escape, while she remaineda prisoner waiting for ... ? Mary shook her head and huddled in the corner of the cell, a chill causing her toshiver. She hugged herself tightly.

Decimus had finally caught her after all these years.

She shivered again, gooseflesh prickling her softskin at the mere thought of the man and his infamousreputation for hunting, capturing, and punishingheretics. It was said that he gained extreme pleasurefrom inflicting pain on his prisoners, and the only escapefrom him was death.

She shook her head slowly at the memories that hadbrought her to this tiny cell. She had lived a quiet, uneventfullife since her parents’ friend Magnus, or asmost knew him the "Legend," had brought her to sanctuaryin the woods in the northeast of Ireland far fromher native Scotland.

Her parents were good people, though their beliefswere a mixture of pagan and Christian. The village ofMuir where she had been raised was not a common village.It was a place of pagans and old beliefs, and hadonce belonged to an old hermit who had grown tired ofhis solitude and encouraged travelers to remain on hisland. The people worked hard alongside each othergrowing their crops, tending to the needy, sharinglaughter and singing songs. They remained to themselves,unnoticed by authorities until her father’s reputationas a teacher had grown.

Tears slipped down her cheek in remembrance of herparents and all they had done to help people. They believedpeople had the right to worship as they chose, tothink, to question. Questions were not encouraged bythe authorities or the Church; obedience and submissionwere the rules and they were to be obeyed withoutquestion ...

Excerpted from Dark Warrior by Donna Fletcher
All rights reserved by the original copyright owners. Excerpts are provided for display purposes only and may not be reproduced, reprinted or distributed without the written permission of the publisher.