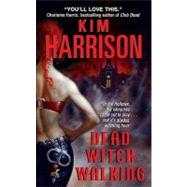 Rachel Morgan is a runner with the Inderland Runner Services, apprehending lawbreakers throughout Cincinnati. She's also a witch, one of the many Inderlanders who revealed themselves after a genetically engineered virus wiped out 50% of humanity. Witches, warlocks, vampires, werewolvesthe creatures of dreams and nightmares have lived beside humans for centuries, hiding their powers. But now theya?Y stopped hiding, and nothing will be the same. On the run with a contract on her head, Rachel reluctantly teams up with Ivy, Inderland's best runnera ?d a living vampire. But this witch is way out of her league, and to clear her name, Rachel must evade shapechanging assassins, outwit a powerful businessman/crimelord, and survive a vicious underground fighttothedeatha-?t to mention her own roommate! Fun, sassy, filled with action, humor, and romance, Dead Witch Walking is the perfect summer read for anyone who likes vampires, paranormal fantasy, romance, or just a great beach book.
Dead Witch Walking

I stood in the shadows of a deserted shop front across fromThe Blood and Brew Pub, trying not to be obvious as I tugged my black leather pants back up where they belonged. This is pathetic, I thought, eyeing the rain-emptied street. Iwas way too good for this.

Apprehending unlicensed and black-art witches was myusual line of work, as it takes a witch to catch a witch. Butthe streets were quieter than usual this week. Everyone whocould make it was at the West Coast for our yearly convention,leaving me with this gem of a run. A simple snag anddrag. It was just the luck of the Turn that had put me here inthe dark and rain.

"Who am I kidding?" I whispered, pulling the strap of mybag farther up my shoulder. I hadn't been sent to tag a witchin a month: unlicensed, white, dark, or otherwise. Bringingthe mayor's son in for Wereing outside of a full moon probablyhadn't been the best idea.

A sleek car turned the corner, looking black in the buzz ofthe mercury street lamp. This was its third time around theblock. A grimace tightened my face as it approached, slowing."Damn it," I whispered. "I need a darker door front."

"Anyone ever tell you that you smell like a drunk bat,Jenks?" I muttered, my lips barely moving. Backup was un-settlingly close tonight, having perched himself on my earring. Big dangling thing -- the earring, not the pixy. I'd foundJenks to be a pretentious snot with a bad attitude and a temperto match. But he knew what side of the garden his nectarcame from. And apparently pixies were the best they'd letme take out since the frog incident. I would have swornfairies were too big to fit into a frog's mouth.

I eased forward to the curb as the car squished to a wet-asphalt halt. There was the whine of an automatic windowas the tinted glass dropped. I leaned down, smiling myprettiest as I flashed my work ID. Mr. One Eyebrow's leervanished and his face went ashen. The car lurched into motionwith a tiny squeak of tires. "Day-tripper," I said in disdain.No, I thought in a flash of chastisement. He was anorm, a human. Even if they were accurate, the terms daytripper, domestic, squish, off-the-rack, and my personal favorite, snack, were politically frowned upon. But if he waspicking strays up off the sidewalk in the Hollows, onemight call him dead.

The car never slowed as it went through a red light, and Iturned at the catcalls from the hookers I had displaced aboutsunset. They weren't happy, standing brazenly on the corneracross from me. I gave them a little wave, and the tallestflipped me off before spinning to show me her tiny, spellenhanced rear. The hooker and her distinctly husky-looking"friend" talked loudly as they tried to hide the cigarette theywere passing between each other. It didn't smell like yourusual tobacco. Not my problem, tonight, I thought, moving back into my shadow.

I leaned against the cold stone of the building, my gazelingering on the red taillights of the car as it braked. Browfurrowed, I glanced at myself. I was tall for a woman -- about five-eight -- but not nearly as leggy as the hooker inthe next puddle of light over. I wasn't wearing as muchmakeup as she was, either. Narrow hips and a chest that wasalmost flat didn't exactly make me streetwalker material.

Before I found the leprechaun outlets, I had shopped in the"your first bra" aisle. It's hard finding something withouthearts and unicorns on it there.

My ancestors had immigrated to the good old U.S. of A.in the 1800s. Somehow through the generations, the womenall managed to retain the distinct red hair and green eyes ofour Irish homeland. My freckles, though, are hidden under aspell my dad bought me for my thirteenth birthday. He hadthe tiny amulet put into a pinky ring. I never leave homewithout it.

A sigh slipped from me as I tugged my bag back up ontomy shoulder. The leather pants, red ankle boots, and thespaghetti strap halter weren't too far from what I usuallywore on casual Fridays to tick off my boss, but put them ona street corner at night ... "Crap," I muttered to Jenks. "Ilook like a hooker."

His only response was a snort. I forced myself not to reactas I turned back to the bar. It was too rainy for the earlycrowd, and apart from my backup and the "ladies" down theway, the street was empty. I'd been standing out here nearlyan hour with no sign of my mark. I might as well go in andwait. Besides, if I were inside, I might look like a soliciteerather than a solicitor.

Taking a resolute breath, I pulled a few strands of myshoulder-length curls from my topknot, took a moment toarrange it artfully to fall about my face, and finally spit outmy gum. The click of my boots made a snappy counterpointto the jangling of the handcuffs pinned to my hip asI strode across the wet street and into the bar. The steelrings looked like a tawdry prop, but they were real andvery well-used. I winced. No wonder Mr. One Eyebrowhad stopped. Used for work, thank you, and not the kindyou're thinking of.

Still, I'd been sent to the Hollows in the rain to collar aleprechaun for tax evasion. How much lower, I wondered,could I sink?

Excerpted from Dead Witch Walking by Kim Harrison
All rights reserved by the original copyright owners. Excerpts are provided for display purposes only and may not be reproduced, reprinted or distributed without the written permission of the publisher.