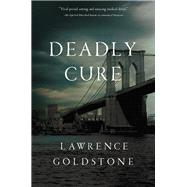 In 1899, in Brooklyn, New York, Dr. Noah Whitestone is called urgently to his wealthy neighbor’s house to treat a five-year-old boy with a shocking set of symptoms. When the child dies suddenly later that night, Noah is accused by the boy’s regular physician—the powerful and politically connected Dr. Arnold Frias—of prescribing a lethal dose of laudanum.

To prove his innocence, Noah must investigate the murder—for it must be murder—and confront the man whom he is convinced is the real killer. His investigation leads him to a reporter for a muckraking magazine and a beautiful radical editor who are convinced that a secret, experimental drug from Germany has caused the death of at least five local children, and possibly many more. Noah is drawn into a dangerous world of drugs, criminals, and politics, which threatens not just his career but also his life.

Goldstone weaves a savvy tale of intrigue and stunning twists that incorporates real-life historical figures and events while richly recreating the closing days of the nineteenth century—a time when American might was on the march in the Pacific, medicine was poised to leap into a new era, radical politics threatened the status quo, and the role of women in American society was undergoing profound change.
Lawrence Goldstone is the author or co-author of more that a dozen books, and has written for the Wall Street Journal, Los Angeles Times, Boston Globe, New Republic, Chicago Tribune, and Miami Herald. He and his wife, author Nancy Goldstone, live in Sagaponack, New York.
What is included with this book?