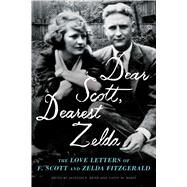 “Pure and lovely…to read Zelda’s letters is to fall in love with her.” —The Washington Post

Edited by renowned Jackson R. Bryer and Cathy W. Barks, with an introduction by Scott and Zelda Fitzgerald's granddaughter, Eleanor Lanahan, this compilation of over three hundred letters tells the couple's epic love story in their own words.

Scott and Zelda Fitzgerald's devotion to each other endured for more than twenty-two years, through the highs and lows of his literary success and alcoholism, and her mental illness. In Dear Scott, Dearest Zelda, over 300 of their collected love letters show why theirs has long been heralded as one of the greatest love stories of the 20th century.

Edited by renowned Fitzgerald scholars Jackson R. Bryer and Cathy W. Barks, with an introduction by Scott and Zelda's granddaughter, Eleanor Lanahan, this is a welcome addition to the Fitzgerald literary canon.
F. Scott Fitzgerald was born in St. Paul, Minnesota, in 1896. He attended Princeton University, joined the United States Army during World War I, and published his first novel, This Side of Paradise, in 1920. That same year he married Zelda Sayre and for the next decade the couple lived in New York, Paris, and on the Riviera. Fitzgerald’s masterpieces include The Beautiful and Damned, The Great Gatsby, and Tender Is the Night. He died at the age of forty-four while working on The Last Tycoon. Fitzgerald’s fiction has secured his reputation as one of the most important American writers of the twentieth century.