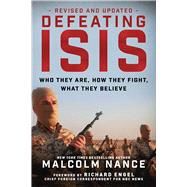 This reference shows how to understand the history and tactics of the global terror group ISIS—and how to use that knowledge to defeat it.

ISIS—the Islamic State of Iraq and Syria—has taken on the mantle of being the single most dangerous terrorist threat to global security since al-Qaeda. In Defeating ISIS, internationally renowned intelligence veteran and counter-terrorism expert Malcolm Nance, author of The Plot to Hack America and the forthcoming Hacking ISIS, gives an insider’s view to explain the origins of this occult group, its violent propaganda, and how it spreads its ideology throughout the Middle East and to disaffected youth deep in the heart of the Western world.

The group and its followers have struck repeatedly over the past few years: in Paris, Brussels, and Nice; at a center for developmental disabilities in San Bernadino, California; in the Pulse nightclub in Orlando, Florida. Defeating ISIS gives a step-by-step analysis of the street-level tactics the terrorists have employed in assaults against fortified targets, in urban combat, and during terrorist operations both at home and abroad. As much as ISIS is a threat to Western targets and regional stability in the Middle East, Nance describes not only its true danger as a heretical death cult that seeks to wrest control of Islam through young ideologues and redefine Islam as a fight to the death against all comers, but also how to defeat it.

Updated throughout and featuring a new afterword, Defeating ISIS is a highly detailed look into the organization by one of the world’s foremost authorities in counter-terrorism
Malcolm Nance is a globally recognized counterterrorism expert and Intelligence Community member who has been deployed to intelligence operations in the Balkans, Middle East, and sub-Saharan Africa. He is the author of The Plot to Hack America, Hacking ISIS, and the Terrorist Recognition Handbook and appears regularly on MSNBC. Nance lives in Philadelphia, Pennsylvania.

Malcolm Nance was named a Genius for the Third Annual MSNBC and 92Y "7 Days of Genius" Festival in March, 2016

Richard Engel is the award-winning chief foreign correspondent for NBC News and has been in the Middle East war zone for over twenty years. He is the author of And Then All Hell Broke Loose, War Journal, and A Fist in the Hornet’s Nest.