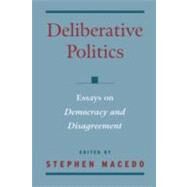 The banner of deliberative democracy is attracting increasing numbers of supporters, in both the world's older and newer democracies. This effort to renew democratic politics is widely seen as a reaction to the dominance of liberal constitutionalism. But many questions surround this newproject. What does deliberative democracy stand for? What difference would deliberative practices make in the real world of political conflict and public policy design? What is the relationship between deliberative politics and liberal constitutional arrangements? The 1996 publication of Amy Gutmann and Dennis F. Thompsons Democracy and Disagreement was a signal contribution to the ongoing debate over the role of moral deliberation in democratic politics. In Deliberative Politics an all-star cast of political, legal, and moral commentators seek to criticize,extend, or provide alternatives to Gutmann and Thompson's hopeful model of democratic deliberation. The essays discuss the value and limits of moral deliberation in politics, and take up practical policy issues such as abortion, affirmative action, and health care reform. Among the impressive rosterof contributors are Norman Daniels, Stanley Fish, William A. Galston, Jane Mansbridge, Cass R. Sunstein, Michael Walzer, and Iris Marion Young, and the editor of the volume, Stephen Macedo. The book concludes with a thoughtful response from Gutmann and Thompson to their esteemed critics. This fine collection is essential reading for anyone who takes seriously the call for a more deliberative politics.
Stephen Macedo is Michael O. Sawyer Professor of Constitutional Law and Politics, Syracuse University.
What is included with this book?