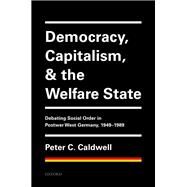 Democracy, Capitalism, and the Welfare State investigates political thought under the conditions of the postwar welfare state, focusing on the Federal Republic of Germany (1949-1989). The volume argues that the welfare state informed and altered basic questions of democracy and its relationship to capitalism. These questions were especially important for West Germany, given its recent experience with the collapse of capitalism, the disintegration of democracy, and National Socialist dictatorship after 1930.

Three central issues emerged. First, the development of a nearly all-embracing set of social services and payments recast the problem of how social groups and interests related to the state, as state agencies and affected groups generated their own clientele, their own advocacy groups, and their own expert information. Second, the welfare state blurred the line between state and society that is constitutive of basic rights and the classic world of liberal freedom; rights became claims on the state, and social groups became integral parts of state administration. Third, the welfare state potentially reshaped the individual citizen, who became wrapped up with mandatory social insurance systems, provisioning of money and services related to social needs, and the regulation of everyday life.

Peter C. Caldwell describes how West German experts sought to make sense of this vast array of state programs, expenditures, and bureaucracies aimed at solving social problems. Coming from backgrounds in politics, economics, law, social policy, sociology, and philosophy, they sought to conceptualize their state, which was now social (one German word for the welfare state is indeed Sozialstaat), and their society, which was permeated by state policies.

Peter C. Caldwell received his Ph.D. in 1993 from Cornell University. He is a Humboldt fellow and recipient of grants from the DAAD. He teaches courses on European political history, German history, revolutions, the welfare state, and the history of political and social thought at Rice University in Houston, Texas.