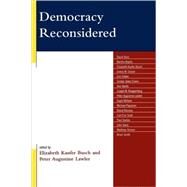 Democracy Reconsidered provides an enlightening study of democracy in America's post-modern context. Elizabeth Kaufer Busch and Peter Augustine Lawler explore some of the foundational principles of democracy as they have been borne out in American society. The essays included in this volume examine the lessons that novelists, philosophers, and political theorists have for democratic societies as they progress towards postmodern skepticism or even disbelief in the absolute principles that form the foundation of democracies. Led by the provocative observations of Lawler, a member of President Bush's Council on Bioethics, the first section lays out the predicament caused by the gravitation of democracy towards a disbelief in absolute truth, leading to a 'crisis of self-evidence.' The second section searches for tools that one might use to restore health to the individual and community within American democracy, including spiritual faith, creative autonomy, and philosophic inquiry. The third section addresses the supposed 'crisis in liberal education' caused by our 'crisis of self-evidence.' Included essays explore the extent to which the professed aims of liberal education may be at odds with the cultivation of dutiful citizens. The book closes by considering some of the political consequences of employing content-less freedom as the primary standard by which human behaviour is judged.
What is included with this book?