Democracy and the US Constitution 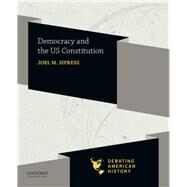 Embracing an argument-based model for teaching history, the Debating American History series encourages students to participate in a contested, evidence-based discourse about the human past. Each book poses a question that historians debate--How democratic was the U.S. Constitution? or Why did civil war erupt in the United States in 1861?--and provides abundant primary sources so that students can make their own efforts at interpreting the evidence. They can then use that analysis to construct answers to the big question that frames the debate and argue in support of their position.

Democracy and the US Constitution poses this big question: How democratic was the U.S. Constitution?

List of Figures
About the Author
Acknowledgments
Introduction
I. The Big Question
II. Timeline
III. Historian's Conversations
Position #1: We Hold These Truths to be Self-Evident": The Creation of a Democratic Republic
Position #2: An Excess of Democracy: The Federalist Assault on Popular Self-Government
Position #3: A Republic of Propertied Men: The Constitution in Historical Context
IV. Debating the Question
A. Declarations and Constitutions
1.1 The Declaration of Independence (1776)
1.2 The Articles of Confederation (1777)
1.3 The Constitution of the United States (1787)
1.4 The Constitutions of Virginia (1776) and Pennsylvania (1776)
1.5 The Bill of Rights (1789)
B. Federalist Documents
2.1 Letter of Alexander Hamilton to James Duane (1780)
2.2 Alexander Hamilton, "Conjectures about the Constitution" (1787)
2.3 James Madison, "Vices of the Political System of the United States" (1787)
2.4 James Madison, "Federalist No. 10" (1787)
2.5 James Madison, "Federalist No. 51" (1788)
C. Documents from Shay's Rebellion
3.1 Daniel Gray, "An Address to the People of the Several Towns in the County of Hampshire, Now at Arms" (1786) and Thomas Grover, "To the Printer of the Hampshire Herald" (1786)
D. Anti-Federalist Documents
4.1 Essay by Montezuma (1787)
4.2 "Political Creed of Every Federalist" (1787)
4.3 Mercy Otis Warren, "Observations on the New Constitution, And on the Federal and State Conventions by a Columbian Patriot" (1788)
4.4 Virginia Convention Recommends Amendments to the Constitution (1788)
E. Voting Restriction and Slave Laws in the Thirteen Original States
F. Biographies of Key Federalists
6.1 Alexander Hamilton
6.2 James Madison
V. Additional Resources
Index
What is included with this book?