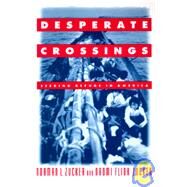 The end of the Cold War has brought with it many changes of attitude and policy in the political arena; however, nowhere has change been so emotionally charged as in the area of politically-based emigration. Refugee policy is the driving force behind many of today's headlines, influencing both foreign and domestic policy. In Desperate Crossings, authors Norman L. and Naomi Flink Zucker chronicle and analyze the phenomenon of mass escape that began with the Haitians, but exploded into the American consciousness in the spring of 1980 with the Mariel boatlift and the subsequent mass exodus from Central America, and was most recently manifested in the Haitian and Cuban exoduses of 1994. In a compelling and carefully documented narrative, they identify the troika of interests - foreign policy, domestic pressures, and costs - that have controlled and determined the American response to refugees since before the Second World War, continuing until today. Desperate Crossings concludes by proposing a comprehensive and politically palatable approach to future refugee flows, both in our hemisphere and for the world community-at-large - including Europe and Asia. The authors suggest how, by changing the course of its refugee policies and programs, the United States can better respond to both the needs of refugees and the demands of its citizens.
What is included with this book?