A Diary Of Battle The Personal Journals Of Colonel Charles S. Wainwright, 1861-1865 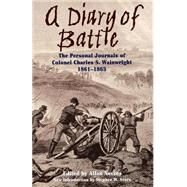 When Colonel Charles S. Wainwright (18261907), later a brevet brigadier general, was commissioned in the First New York Artillery Regiment of the Army of the Potomac in October 1861, he began a journal. As an officer who fought at Fredericksburg, Chancellorsville, Gettysburg, the Wilderness, Cold Harbor, Spotsylvania, and Petersburg, and who witnessed the leadership of Generals McClellan, Hooker, Burnside, Meade, Grant, and Sheridan, he brilliantly describes his experiences, views, and emotions. But Wainwright's entries go beyond military matters to include his political and social observations. Skillfully edited by Allan Nevins, historian and author of the classic multivolumeOrdeal of the Union, this journal is Wainwright's vivid and invaluable gift to posterity.
Allan Nevins is an historian and author of the classic multivolume Ordeal of the Union.
What is included with this book?