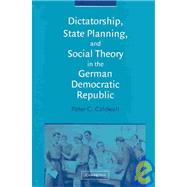 The introduction of state planning and party dictatorship dramatically altered the environment for social theory in the German Democratic Republic. But social thought did not disappear. By the mid-1950s, East German social theorists discovered the basic contradictions of state socialism that would eventually lead to its collapse: the inability of the plan to function without markets and its inability to permit markets; the inability of the party-state to guarantee the rule of law and yet also the need for a regular system of rules in a modern industrial society; and the contradictory philosophical claims of a Marxist-Leninist philosophy that rejected idealism, and Marxist-Leninist dogma with its idealistic claim to know the laws of social modernization. Making use of archival sources, Caldwell examines the articulation of these analyses, their subsequent suppression by party authorities in the late 1950s, and their return under the guise of cybernetics in the 1960s.
What is included with this book?