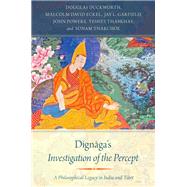 While a short work of only eight verses and a three-page autocommentary, the Investigation of the Percept has inspired epistemologists for centuries and has had a wide-ranging impact in India, Tibet, and China. Dignaga, one of the major figures in Buddhist epistemology, explores issues such as the relation between the mind and its percepts, the problems of idealism and realism, and the nature of intentionality in this brief but profound text.

This volume provides a comprehensive history of the text in India and Tibet from 5th century India to the present day. This team of philologists, historians of religion and philosophers who specialize in Tibetan, Sanskrit and Chinese philosophical literature has produced the first study of the text and its entire commentarial tradition. Their approach makes it possible to employ the methods of critical philology and cross-cultural philosophy to provide readers with a rich collection of studies and translations, along with detailed philosophical analyses that open up the intriguing implications of Dign=aga's thought and demonstrate the diversity of commentarial approaches to his text.

The comprehensive nature of the work reveals the richness of commentary in Indian and Tibetan Buddhism and shows surprising parallels between the modern West and traditional Buddhist philosophy.

Douglas Duckworth is Assistant Professor in the Department of Religion at Temple University.

Malcolm David Eckel is a Professor of Religion and Director of the Institute for Philosophy and Religion at Boston University.

John Powers is Professor of Asian Studies in the School of Culture, History and Language in the College of Asia and the Pacific, Australian National University and a Fellow of the Australian Academy of Humanities.

Yeshes Thabkhas is Professor Emeritus of Indian Buddhist Philosophy at the Central University of Tibetan Studies.

English-Tibetan-Sanskrit Glossary
Bibliography
Index
What is included with this book?