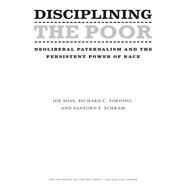 Disciplining the Poorlays out the underlying logic of contemporary poverty governance in the United States. The authors argue that poverty governance-how social welfare policy choices get made, how authority gets exercised, and how collective pursuits get organized-has been transformed in the United States by two significant developments. The rise of paternalism has promoted a more directive and supervisory approach to managing the poor. This has intersected with a second development: the rise of neoliberalism as an organizing principle of governance. Neoliberals have redesigned state operations around market principles; to impose market discipline, core state functions-from war to welfare-have been contracted out to private providers. The authors seek to clarify the origins, operations, and consequences of neoliberal paternalism as a mode of poverty governance, tracing its impact from the federal level, to the state and county level, down to the differences in ways frontline case workers take disciplinary actions in individual cases. The book also addresses the complex role race has come to play in contemporary poverty governance.
Joe Soss is the Cowles Professor for the Study of Public Service in the Hubert H. Humphrey School of Public Affairs at the University of Minnesota. Richard C. Fording is professor in and chair of the Department of Political Science at the University of Alabama. Sanford F. Schram teaches social theory and policy in the Graduate School of Social Work and Social Research at Bryn Mawr College.
What is included with this book?