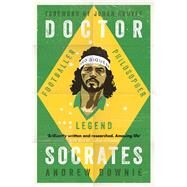 Socrates was always special. With his 6’4” frame and incredible skill, the attacking midfielder stood out. He was a hugely talented athlete who graduated in medicine, yet drank and smoked to excess. Fans were enthralled by his inch-perfect passes, his coolness in front of the goal, and his back heel—the trademark move that singled him out as the most unique footballer of his generation.

Off the pitch, he was just as original with a dedication to politics and social causes that no player has ever emulated. As the leader of Corinthians Democracy—a movement that gave everyone from the kitman to the president an equal say in the running of the club—Socrates revolutionized football management and left a truly lasting impression at a time when Brazil was ruled by military dictatorship.

Passionate and principled, entertaining and erudite, Socrates was as contradictory as he was complex. He was a socialist who voted for a return of Brazil’s monarchy, a fiercely independent individual who was the ultimate team player, and a romantic who married four times and fathered six children.

Armed with Socrates’s unpublished memoir and hours of newly discovered interviews, Andrew Downie has created the most comprehensive and compelling account of this iconic figure. Based on conversations with family members, close friends, and former teammates, Doctor Socrates is the brilliant biography of a man who always stood up for what he believed in—whatever the cost.