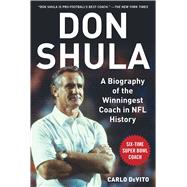 Here acclaimed sports historian Carlo DeVito captures the story of one of the greatest coaches in National Football history. This is must reading for fans of the Baltimore Colts, Miami Dolphins, and pro football.

First distinguishing himself as a player with the Cleveland Browns (under the great Paul Brown), Baltimore Colts, and Washington Redskins, Donald Francis Shula went on to be the boy wonder of the NFL as a coach. After serving for three seasons as the defensive coordinator for the Detroit Lions, where he oversaw one of the NFL’s toughest units,

Shula was named the youngest head coach in NFL history when he took over the Baltimore Colts in 1963. But after public feuding with star quarterback Johnny Unitas and owner Carroll Rosenbloom, and despite leading the team to two NFL championship games, Shula accepted the job as head coach of the perennial doormat Miami Dolphins in 1970.

Within a few seasons, he took the Dolphins to three straight Super Bowls, winning twice, including the only undefeated Super Bowl championship season in 1972 behind a bruising running attack led by two 1,000-yard rushers, Larry Csonka and Mercury Morris, as well as the unheralded “No-Name Defense.”

Shula won more games (328) than any other coach in NFL history, led his teams to six Super Bowls, and only posted a losing record twice in thirty-three seasons on the sideline. He was enshrined in the Pro Football Hall of Fame in 1997. Don Shula chronicles the life of one of the greatest minds ever to be involved with the game, from the dawn of modern football to the close of the twentieth century.
Carlo DeVito is the author of more than fifteen books, including D. Wayne: The High-Rolling and Fast Times of America’s Premiere Horse Trainer, Wellington: The Maras, the Giants and the City of New York, and Yogi: The Life and Times of an American Original. He is co-owner of the Hudson-Chatham Winery and resides in Ghent, New York.