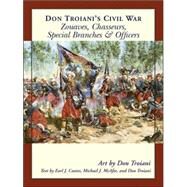 In the world of historical painting, Don Troiani stands alone, universally acclaimed for the accuracy, drama, and detail of his depictions of America's past. In Don Troiani's Regiments and Uniforms of the Civil War, first released in 2002, the artist turned his brush to the units and uniforms of the War between the States. Through Troiani's careful reconstructions and the accompanying text, the book offers one of the most comprehensive looks at Civil War uniforms ever undertaken. In addition to the full volume in hard cover, Stackpole Books now presents four handsome, individually bound paperbacks, each covering different branches of service and types of soldier.Both the cavalry and the artillery played critical roles in the Civil War. The uniforms of horsemen and cannoneers resembled those of the infantry but differed in key respects, such as the bright yellow trim that distinguished the cavalry and the crossed-cannon insignia of the artillery. The artwork in this volume gives a flavor of how these specialized troops were outfitted.
Don Troiani is the artist-author responsible for the successful "Don Troiani's Civil War" (081170341X) and "Don Troiani's Soldiers in America, 1754-1865" (0811705196). His artwork has appeared in American Heritage and Smithsonian magazines, the National Park Service, West Point, and the Smithsonian Institution. Earl J. Coates, former curator of the National Security Agency, is a leading authority on Civil War uniforms. Now retired and living in Gettysburg, he has been involved with Maryland Arms Collectors, the North-South Skirmish Association, and the Friends of Gettysburg National Park. Michael J. McAfee is an author of numerous books and articles. He is a collector of Civil War photography and an authority on Civil War uniforms, particularly Zouaves. He is a curator at the West Point Museum at the United States Military Academy.
What is included with this book?