These Dreams of You 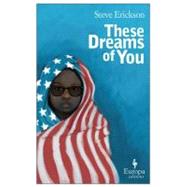 One November night in a canyon outside L.A., Zan Nordhoc-a failed novelist turned pirate radio DJ-sits before the television with his small, adopted black daughter, watching the election of his country's first black president. In the nova of this historic moment, with an economic recession threatening their home, Zan, his wife and their son set out to solve the enigma of the little girl's life. When they find themselves scattered and strewn across two continents, a mysterious stranger with a secret appears, who sends the story spiraling forty years into the past.