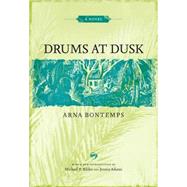 A story of love, violence, and race set at the outbreak of the Haitian Revolution in 1791, African American writer Arna Bontemps's Drums at Dusk immerses readers in the opulent and brutal - yet also very fragile - society of France's richest colony, Saint Domingue. First published in 1939, this novel explores the complex web of tensions connecting wealthy plantation owners, poor whites, free people of color, and the slaves who stunned the colony and the globe by uniting in a carefully planned uprising. The novel's hero, Diron Desautels, a white Creole born in Saint Domingue who belongs to the French antislavery group Societe des Amis des Noirs, attempts to spread his message of "liberty, equality, fraternity" in a world fraught with conflict.
Inhabiting a wide spectrum of Haitian voices, including those of white indentured servants, female slaves, and Toussaint L'Ouverture, who later emerged as the revolution's best-known hero, Bontemps's work reflects not only the intricacies of Haitian society on the eve of the revolution, but also a black artist's vision of Haiti in the twentieth century, during the U.S. Marines' occupation and at the brink of war in Europe.
What is included with this book?