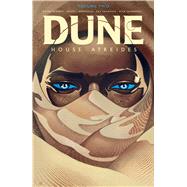 THE OFFICIAL PREQUEL TO THE GROUNDBREAKING DUNE CONTINUES... Leto Atreides brings news of the revolt brewing on Ix, but the city’s leaders make a decision that may threaten everyone, while Crown Prince Shaddam plots to overtake it. Meanwhile, Pardot Kynes begins spreading his edenic vision to terraform the desert planet of Dune into an oasis even as the native Fremen raise suspicions about his motives...and if he can truly accomplish his goals. The New York Times best-selling Dune: House Atreides comes to comics for the first time, adapted & scripted by Brian Herbert and Kevin J. Anderson, who co-wrote the eponymous prequel novel based on Dune creator Frank Herbert’s notes and illustrated by artist Dev Pramanik (Paradiso). Collects Dune: House Atreides #5-8.

Brian Herbert is the son of legendary science fiction author Frank Herbert and has written the definitive biography of him, Dreamer of Dune, a finalist for the Hugo Award. His earlier acclaimed novels include The Stolen Gospels, Sudanna Sudanna, and Sidney’s Comet, as well as Man of Two Worlds (written with his father). Brian has collaborated on many novels in the Dune series with Kevin J. Anderson, all of which became international bestsellers. Brian also co-manages the legacy of Frank Herbert and is an executive producer of the new motion picture Dune and the forthcoming TV series Dune: The Sisterhood. Kevin J. Anderson has published more than 165 books, 56 of which have been national or international bestsellers. Some of his most prominent work is written in the Dune universe with Brian Herbert, and he has written numerous novels in the worlds of Star Wars, X-Files, and Superman/Batman. Along with legendary Rush drummer Neil Peart, he created the unique steampunk fantasy novels Clockwork Lives and Clockwork Angels (which he also adapted as a graphic novel for BOOM! Studios). His original works include the Saga of Seven Suns series, the Terra Incognita fantasy trilogy, the Saga of Shadows trilogy, and his humorous horror series featuring Dan Shamble, Zombie P.I. Created by visionary writer Frank Herbert, Dune debuted in 1965, has sold millions of copies and is arguably the most admired science fiction novel of all time. After winning the Hugo Award and inaugural Nebula Award, Dune inspired a best-selling novel series and led to multiple live-action adaptations, including the upcoming feature film from Legendary Pictures which is slated to debut in theaters and on HBO Max in 2021. The influence of Dune extends well beyond the world of entertainment, with an incalculable influence on modern scientific thinking about politics, religion, outer space, environmentalism and more.
What is included with this book?