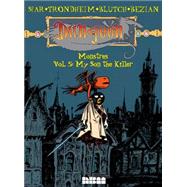 In the title story, we meet Marvin the Dragon—still a pup with his Mom but make no mistake, both are formidable. Their ferocity catches the eye of the Keeper who is still making his way up the ladder in Antipolis and has many dangerous enemies. He makes them his bodyguards. Soon enough, crafty little Marvin manages to witness a sinister plot and tries to save the Keeper and the city's leaders from annihilation. In "Soldiers of Honor," Gork and Krag are brothers and soldiers of hell. They keep a secret door in the Dungeon. The door being little used, they get bored, until an old blind man forces Krag, alone on duty that day, to call reinforcements to prevent him from entering. Because he has not fulfilled his mission, Krag is sentenced to be killed by his own brother in the middle of the desert.
Joann Sfar is an artist, writer, and film director. He is best known for his adaptation of The Little Prince and his original title The Rabbi’s Cat. He recently wrote and directed a movie and authored a graphic novel on the life of Serge Gainsbourg. Lewis Trondheim is the creator of such comic strips as A.L.I.E.E.E.N., McConey Rabbit, and Mr. O. He is the author of A.L.I.E.E.E.N.: Archives of Lost Issues, Kaput & Zosky, the Little Nothings series, and Mister I. He is the head of Shampooing, an imprint of the French comics publisher Delcourt. Frédéric Bézian is a French comic artist trained at the prestigious Saint Luc School for comic art. Since the 1980s, he has authored many works for a variety of indie and larger houses, most notably the Humanoids. Blutch is the pen name for Christian Hincker, a prominent French artist whose body of boundary-stretching work was given the highest honor when he was awarded the Grand Prize of the city of Angouleme in 2009, placing him in a pantheon of the best comic artists alive today.
What is included with this book?