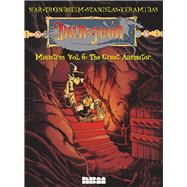 The latest volume in the popular Dungeon series with over 50,000 copies sold

In an automaton-themed volume, The Great Animator pits the predecessor to the Vaucanson great castle and realm against a huge army of ruthless invaders. The great castle’s army of battle automatons evens the fight but at great cost. In the second story, “The Inventor’s Grimoire,” the Vaucanson grimoire with the secrets of building automatons has disappeared. If the secrets fell in the wrong hands, much harm could come of it. And indeed, it turns out the greedy Lord Delacour has snatched it with the intention of auctioning it off to the highest bidder.
Joann Sfar is an artist, writer, and film director. He is best known for his adaptation of The Little Prince and his original title The Rabbi’s Cat. He recently wrote and directed a movie and authored a graphic novel on the life of Serge Gainsbourg. Lewis Trondheim is the creator of such comic strips as A.L.I.E.E.E.N., McConey Rabbit, and Mr. O. He is the author of A.L.I.E.E.E.N.: Archives of Lost Issues, Kaput & Zosky, the Little Nothings series, and Mister I. He is the head of Shampooing, an imprint of the French comics publisher Delcourt. Stanislas is the nom de plume for Stanislas Barthelemy, a prominent French author of comics for kids and adults. He is one of the cofounders, along with Lewis Trondheim, of the influential L’Association artist cooperative. Nicolas Keramidas is a successful comic artist who previously worked in the French Disney animation studio.
What is included with this book?