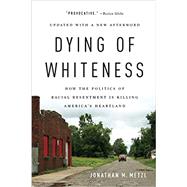 A physician's "provocative" (Boston Globe) and "timely" (Ibram X. Kendi, New York Times Book Review) account of how right-wing backlash policies have deadly consequences -- even for the white voters they promise to help.

In election after election, conservative white Americans have embraced politicians who pledge to make their lives great again. But as physician Jonathan M. Metzl shows in Dying of Whiteness, the policies that result actually place white Americans at ever-greater risk of sickness and death. Interviewing a range of everyday Americans, Metzl examines how racial resentment has fueled progun laws in Missouri, resistance to the Affordable Care Act in Tennessee, and cuts to schools and social services in Kansas. He shows these policies' costs: increasing deaths by gun suicide, falling life expectancies, and rising dropout rates.

Now updated with a new afterword, Dying of Whiteness demonstrates how much white America would benefit by emphasizing cooperation rather than chasing false promises of supremacy.

Winner of the Robert F. Kennedy Book Award
Jonathan M. Metzl is the Frederick B. Rentschler II professor of sociology and psychiatry at Vanderbilt University and director of its Center for Medicine, Health, and Society. He is the author of several books and a prominent expert on gun violence and mental illness. He hails from Kansas City, Missouri, and lives in Nashville, Tennessee.
What is included with this book?