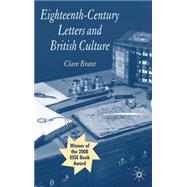 This important book, now in paperback, explores epistolary forms and practices in relation to important areas of British culture. Who wrote letters? Who read letters? What were the conventions of letters and how were they understood? Each chapter explores these questions in relation to a series of characters, including men and women of letters, parents, lovers, criminals, citizens, travelers, historians and Christians. Bringing together a wide range of epistolary materials, both non-fictional and fictional, this original and important study gives extensively-researched understanding of the central place of letters in eighteenth-century writing, and a new way of looking at eighteenth-century life. The volume will be of immense value to literary scholars and historians alike, and marks an important milestone in eighteenth-century studies.
CLARE BRANT is a Professor in English at King's College London, UK. She has previously held posts at Oxford and Cambridge Universities. She has co-edited three essay collections and published numerous articles on eighteenth-century literature and culture.
Acknowledgements
A Letter of Introduction
Learning to Write
Writing as a Parent
Writing as a Lover
Writing as a Criminal
Writing as a Citizen
Writing as a Traveller
Writing as a Historian
Writing as a Christian
Postscript
Notes
Short Bibliography
Index