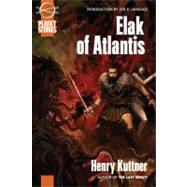 Explore the origins of Sword & Sorcery with Henry Kuttner's Elak of Atlantis! Published in Weird Tales to satisfy fans of Conan the Barbarian in the wake of Robert E. Howard's death, the four long stories depict a brutal world of flashing swords and primal magic, touched by a hint of Lovecraft's Cthulhu mythos. Never collected in a mass market edition since their publication in the late 1930s, these exciting tales helped to establish a genre and are a critical part of any fantasy library. Included as a bonus are Kuttner's two Prince Raynor stories from 1939's Strange Tales. With seminal, thrilling adventure tales from one of the most important writers in science-fiction and fantasy, Elak of Atlantis is not to be missed!