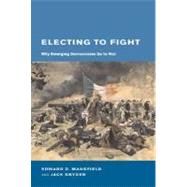 Does the spread of democracy really contribute to international peace? Successive U. S. administrations have justified various policies intended to promote democracy not only by arguing that democracy is intrinsically good but by pointing to a wide range of research concluding that democracies rarely, if ever, go to war with one another. To promote democracy, the United States has provided economic assistance, political support, and technical advice to emerging democracies in Eastern and Central Europe, and it has attempted to remove undemocratic regimes through political pressure, economic sanctions, and military force. In Electing to Fight, Edward Mansfield and Jack Snyder challenge the widely accepted basis of these policies by arguing that states in the early phases of transitions to democracy are more likely than other states to become involved in war. Drawing on both qualitative and quantitative analysis, Mansfield and Snyder show that emerging democracies with weak political institutions are especially likely to go to war. Leaders of these countries attempt to rally support by invoking external threats and resorting to belligerent, nationalist rhetoric. Mansfield and Snyder point to this pattern in cases ranging from revolutionary France to contemporary Russia. Because the risk of a state's being involved in violent conflict is high until democracy is fully consolidated, Mansfield and Snyder argue, the best way to promote democracy is to begin by building the institutions that democracy requires -- such as the rule of law -- and only then encouraging mass political participation and elections. Readers will find this argument particularly relevant to prevailing concerns about the transitional government in Iraq. Electing to Fightalso calls into question the wisdom of urging early elections elsewhere in the Islamic world and in China.
Edward D. Mansfield is Hum Rosen Professor of Political Science at the University of Pennsylvania
What is included with this book?