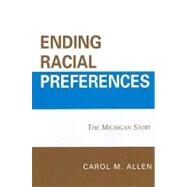 In 2006, Michigan voters banned affirmative action preferences in public contracting, education, and employment. The Michigan Civil Rights Initiative vote was preceded by years of campaigning, legal maneuvers, and debate. Ending Racial Preferences: The Michigan Story relates what happened from the vantage point of Toward A Fair Michigan (TAFM), which provided a civic forum for the discussion of preferences. The book describes how TAFM fostered dialogue by emphasizing education over indoctrination, reason over rhetoric, and civil debate over protest. It also analyzes similar initiatives in California, Florida, Washington state, and Houston, Texas. Readers are invited to decide for themselves whether preferences are good for America by evaluating the pro and con arguments from TAFM debates that are presented. Book jacket.
Carol M. Allen is a research specialist at Michigan State University.
What is included with this book?