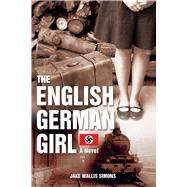 In 1930s Berlin, choked by the tightening of Hitler’s fist, the Klein family is gradually losing everything that is precious to them. In desperation, their fifteen-year-old daughter, Rosa, is put on a Kindertransport train out of her beloved Germany to begin a new life in a foreign country, England.

Unable to speak the language and charged with the task of securing a safe passage for her family, Rosa vows that she will not rest until they are safe. But as war breaks out and she loses contact with her parents, Rosa finds herself wondering if there are some vows that can’t be kept. Now, she must face the prospect of an unknown future in wartime England—alone.

Powerfully written and meticulously researched, The English German Girl is a sweeping historical fiction about one girl’s journey from heartbreak to hope against the torrential backdrop of the Second World War. An exceptional accomplishment from one of Britain’s bravest and most vibrant young writers, The English German Girl explores the quiet struggles of a child survivor of the Holocaust with sensitivity, grit, and tenderness
Jake Wallis Simons is a staff writer for the Sunday Telegraph, radio broadcaster, artist, and award-winning novelist. He has a PhD in creative writing, and his writing has been featured in the Times, Guardian, and Independent. He lives with his family in Winchester, the United Kingdom.