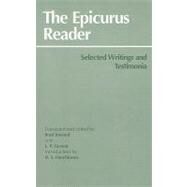 A total philosophy of life, death, religion, science, ethics, and culture promising liberation from the obstacles that stand in the way of our happiness, the teachings of Epicurus claimed many thousand committed followers all over the ancient Mediterranean world and deeply influenced later European thought. From the first years of its development, however, Epicureanism faced hostile opposition, and, as a result, much of our evidence for the content of this teaching is unhelpful and even misleading. "The Epicurus Reader" fills the need for a reliable selection and translation of the main surviving evidence, some of it never previously translated into English. Included here, with the exception of Lucretius De Rerum Natura, are the most important surviving ancient texts of a system of thought that even today remains a powerful living philosophy. "The Epicurus Reader" will be greatly welcomed by anybody who teaches Hellenistic Philosophy, or Epicureanism in particular, at any level. It offers a judicious and ample selection of texts, including the only extant writings by Epicurus. More importantly it provides a reliable, often admirably accurate translation of these sometimes difficult texts. Finally, there is an introduction the general reader or the undergraduate will find very helpful." - Michael Frede, Keble College, Oxford
What is included with this book?