Erebos : It's a Game. It Watches You 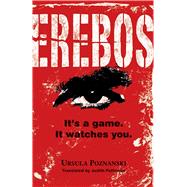 Rights sold in 25 countries Translated into 23 languages Over 120,000 copies sold in Germany Winner of the highly prestigious Children's Literature Prize (Jugendliteraturpreis) in 2011 An intelligent computer game with a disturbing agenda. When 16-year-old Nick gets a package, he wonders if it will explain the behavior of his classmates, who have been secretive lately. The package contains the mysterious computer game Erebos. Players must obey strict rules: always play alone, never talk about the game, and never tell anyone your nickname. Curious, Nick joins the game and quickly becomes addicted. But Erebos knows a lot about the players and begins to manipulate their lives. When it sends Nick on a deadly assignment, he refuses and is banished from the game. Now unable to play, Nick turns to a friend for help in finding out who controls the game. The two set off on a dangerous mission in which the border between reality and the virtual world begins to blur. This utterly convincing and suspenseful thriller originated in Germany where it has become a runaway bestseller. International praise for Erebos: Like the game in the story, this book pulls the reader under its spell and doesn't let go until the puzzle is solved. -- Buchkultur This year's summer thriller! -- Die Zeit This captivating book for young people about the danger of virtual worlds is impossible to put down. -- Brigitte Magazine A masterful, riveting thriller. -- Neue Zürcher Zeitung A super-suspenseful book full of insight about the fascination that computer games hold. -- Literature.de An unbelievably good book. -- Freizeitmagazin Weinheimer Nachrichten Plunges the reader into a fantasy world in the same way that Nick is drawn into his game. -- Eselsohr This thriller is a tour de force. -- Kriminforum.de
What is included with this book?