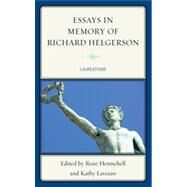 This book brings together new essays by leading cultural critics who have been influenced by the groundbreaking scholarship of Richard Helgerson. The original essays penned for this anthology evince the ongoing impact of Helgerson's work in major critical debates including national identity, literary careerism, and studies of form. Analyzing not only early modern but also medieval literary texts, the pieces that comprise Laureations respond to both Helgerson's more famous scholarly works and the whole range of his critical corpus, from his earliest work on prodigality to his latest writings on mid-sixteenth century European poets. The interdisciplinary, transnational, and comparativist spirit of Helgerson's criticism is reflected in the essays, as is his commitment to studies of multiple genres that nevertheless attend to the particularities of form. Contributors offer new interpretations of a slew of Shakespeare's plays-Hamlet, I Henry IV, The Tempest, Coriolanus, Antony and Cleopatra, King Lear-and other dramas such as Beaumont's The Knight of the Burning Pestle, the anonymous drama The London Prodigal, and Stephen Greenblatt and John Mee's contemporary play Cardenio. In keeping with Helgerson's comparativist turn, the volume includes analyses of Joachim Du Bellay's poetry and Donato Gianotti's literary critical discussion of The Divine Comedy. Prose works featured in the volume encompass More's Utopia and Isaac Walton's The Compleat Angler. Spenser's early poetry and the medieval romance Floris and Blanchflour also receive new readings.
Roze Hentschell is associate professor of English at Colorado State University. Kathy Lavezzo is associate professor of English at the University of Iowa.
What is included with this book?