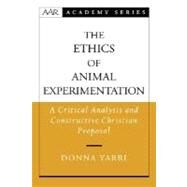 The ethical treatment of animals has become an issue of serious moral concern. Many people are challenging long-held assumptions about animals and raising questions about their status and treatment. What is the relationship between humans and animals? Do animals have moral standing? Do wehave direct or indirect duties to animals? Does human benefit always outweigh animal suffering? The use of animals for experimentation raises all of these questions in a particularly insistent way. Donna Yarri gives an overview of the current state of the discussion, and presents an argument forsignificantly restricted animal experimentation. Pointing to the similarities between humans and animals, she argues that the actual differences are differences of degree rather than kind. Animal cognition and animal sentiency together are the basis for the claim that experimental animals do haverights. Examining arguments in the disciplines of ethology, philosophy, science, and theology, Yarri makes a case for placing substantial restrictions on animal experimentation. Grounding her examination in Christian theology, she formulates a more humane approach to animal experimentation. Sheconcludes with a concrete burden-benefit analysis that can serve as the foundation for informed decision-making. The Ethics of Animal Experimentation serves as both a handbook of animal rights theory and a practical guide to navigating the complexities of animal experimentation. As animalexperimentation features in an increasing number of scientific endeavors, it is an ethical issue that requires our immediate attention. Yarri's unique contribution forges a path toward an ethical practice of animal experimentation.
Donna Yarri is Assistant Professor of Theology at Alvernia College in Reading, Pennsylvania. She received her Ph.D. in Religious Ethics from Southern Methodist University. Her research interests include the ethical treatment of animals, religion and film, and issues of social justice.