Ethnic Peace in the American City : Building Community in Los Angeles and Beyond 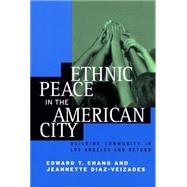 The Los Angeles riot of 1992 marked America's first high-profile multiethnic civil unrest. Latinos, Asian Americans, whites, and African Americans were involved as both victims and assailants. Nearly half of the businesses destroyed were Korean American owned, and nearly half of the people arrested were Latino.In the aftermath of the unrest, Los Angeles, with its extremely diverse population, emerged as a particularly useful site in which to examine race relations.Ethnic Peace in the American Citydocuments the nature of contemporary inter-ethnic relations in the United States by describing the economic, political, and psychological dynamics of race relations in inner-city Los Angeles. Drawing from local as well as international examples, the authors present strategies such as coalition building, dispute resolution, and community organizing.Moving beyond the stereotyped focus on negative interactions between minority groups such as Korean-owned businesses and the African American community, and countering the white-black or bi-racial paradigms of American race relations, the authors explore practical means by which ethnically fragmented neighborhoods nationwide can work together to begin to address their common concerns before tensions become explosive.Table of ContentsAcknowledgmentsIntroduction1America's First Multiethnic "Civil Unrest"2New Urban Crisis: Korean-African American Relations3The Media, the Invisible Minority, and Race4Building Immigrant Communities in Los Angeles: Koreatown and Pico-Union5Building Cross-Cultural Coalitions: The Black-Korean Alliance (BKA) and the Latino-Black Roundtable (LBR)6Conflict Resolution and Community Development in Multicultural Urban CentersNotesBibliographyIndexAbout the Authors
Edward T. Chang is associate professor of Ethnic Studies and a former director of the Center for Asian Pacific America at the University of California, Riverside. Jeannette Diaz-Veizades is an executive faculty member at the Saybrook Graduate School.
What is included with this book?