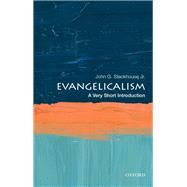 Evangelicalism has rapidly become one of the most significant religious movements in the modern world.
An umbrella term that encompasses many Protestant denominations that share core tenets of Christianity, evangelicalism is foremost defined by its disciples' consideration of the Bible as the ultimate moral and historical authority, the desire to evangelize or spread the faith, and the value of religious conversion known as being born again.

As the Evangelical movement has grown rapidly, so has its influence on the political stage. Evangelicals affect elections up and down the Americas and across Africa, provoke governments throughout Asia, fill up some of the largest church buildings, and possess the largest congregations of any religion in the world. Yet evangelicals are wildly diverse- from Canadian Baptists to Nigerian Anglicans, from South Sea Methodists to Korean Presbyterians, and from house churches in Beijing to megachurches in Saõ Paulo.

This Very Short Introduction tells the evangelical story from the preacher-led revivals of the eighteenth century, through the frontier camp meetings of the nineteenth, to the mass urban rallies of the twentieth and the global megachurches of the twenty-first. More than just a sketch of where evangelicals have come from, this volume aims to clearly examine the heart of evangelical phenomenon. Is there such a (single) thing as evangelicalism? What is its basic character? Where are the evangelicals going? And what in the world do they want?

John G. Stackhouse Jr. is Mikolaski Professor of Religious Studies at Crandall University. An award-winning scholar, teacher, and public communicator, he has
authored and edited over a dozen books and hundreds of articles dealing with the evangelical tradition.