Everything You Want Me to Be A Novel 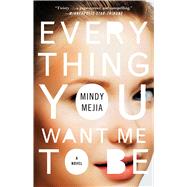 "Readers drawn to this compelling psychological thriller because of its shared elements with Gillian Flynn’s Gone Girl (2012) will be pleasantly surprised to discover that Mejia’s confident storytelling pulls those themes into an altogether different exploration of manipulation and identity.” —Booklist (starred review)

No one knows who she really is…

Hattie Hoffman has spent her whole life playing many parts: the good student, the good daughter, the good girlfriend. But Hattie wants something more, something bigger, and ultimately something that turns out to be exceedingly dangerous. When she’s found brutally stabbed to death, the tragedy rips right through the fabric of her small-town community.

It soon comes to light that Hattie was engaged in a highly compromising and potentially explosive secret online relationship. The question is: Did anyone else know? And to what lengths might they have gone to end it? Hattie’s boyfriend seems distraught over her death, but had he fallen so deeply in love with her that she had become an obsession? Or did Hattie’s impulsive, daredevil nature simply put her in the wrong place at the wrong time, leading her to a violent death at the hands of a stranger?

Full of twists and turns, Everything You Want Me to Be reconstructs a year in the life of a dangerously mesmerizing young woman, during which a small town’s darkest secrets come to the forefront…and she inches closer and closer to death.

Evocative and razor-sharp, Everything You Want Me to Be challenges you to test the lines between innocence and culpability, identity and deception. Does love lead to self-discovery—or destruction?
Mindy Mejia is a CPA and a graduate of the Hamline University MFA program. Her debut novel, The Dragon Keeper, was published by Ashland Creek Press in 2012. She lives in the Twin Cities with her family, and is the author of Strike Me Down, Everything You Want Me to Be, and Leave No Trace.
What is included with this book?