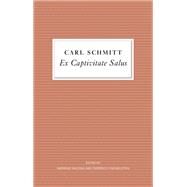 When Germany was defeated in 1945, both the Russians and the Americans undertook mass internments in the territories they occupied. The Americans called their approach “automatic arrest.” Carl Schmitt, although not belonging in the circles subject to automatic arrest, was held in one of these camps in the years 1945–6 and then, in March 1947, in the prison of the international tribunal in Nuremberg, as witness and “possible defendant.” A formal charge was never brought against him. Schmitt’s way of coping throughout the years of isolation was to write this book.

In Ex Captivitate Salus, or Deliverance from Captivity, Schmitt considers a range of issues relating to history and political theory as well as recent events, including the Nazi defeat and the newly emerging Cold War. Schmitt often urged his readers to view the book as though ​it were a series of letters personally directed to each one of them.  Hence there is a decidedly personal dimension to the text, as Schmitt expresses his thoughts on his own career trajectory with some pathos, while at the same time emphasising that “this is not romantic or heroic prison literature.”

This reflective work sheds new light on Schmitt’s thought and personal situation at the beginning of a period of exile from public life that only ended with his death in 1985. It will be of great value to the many students and scholars in political theory and law who continue to study and appreciate this seminal theorist of the twentieth century.

Carl Schmitt (1888-1985) is widely acknowledged to be one of the most important and influential political theorists of the twentieth century. His many works published in English include The Concept of the Political, Political Theology and On Dictatorship.
Introduction: Carl Schmitts Prison Writings
Andreas Kalyvas and Federico Finchelstein
Translators Note
Conversation with Eduard Spranger (Summer 1945)
Remarks in Response to a Radio Speech by Karl Mannheim (Winter 1945/46)
Historiographia in Nuce: Alexis de Tocqueville (August 1946)
Two Graves (Summer 1946)
Ex Captivitate Salus (Summer 1946)
Wisdom of the Cell (April 1947)
Song of the Sixty-Year-Old
Appendix: Foreword to the Spanish Edition
Notes
Index
What is included with this book?