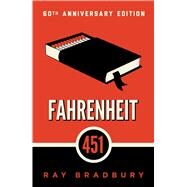 Celebrate the fiftieth anniversary of this timeless classic with a special edition featuring a new introduction by the author and a message that is more relevant today than when it was first published. Since the late 1940s, Ray Bradbury has been revered for his works of science fiction and fantasy. With more than five million copies in print, Fahrenheit 451 -- originally published in 1953 -- remains his most acclaimed work. Fahrenheit 451 is the temperature at which book paper burns. Fahrenheit 451 is a novel set in the (perhaps near) future when "firemen" burn books forbidden by a totalitarian "brave new world" regime. The hero, according to Mr. Bradbury, is "a book burner who suddenly discovers that books are flesh-and-blood ideas and cry out silently when put to the torch." Today, when libraries and schools in this country and all over the world are still "burning" certain books, Fahrenheit 451 remains a brilliantly readable and suspenseful work of even greater impact and timeliness.
Ray Bradbury (1920–2012) was the author of more than three dozen books, including Fahrenheit 451, The Martian Chronicles, The Illustrated Man, and Something Wicked This Way Comes, as well as hundreds of short stories. He wrote for the theater, cinema, and TV, including the screenplay for John Huston’s Moby Dick and the Emmy Award–winning teleplay The Halloween Tree, and adapted for television sixty-five of his stories for The Ray Bradbury Theater. He was the recipient of the 2000 National Book Foundation’s Medal for Distinguished Contribution to American Letters, the 2007 Pulitzer Prize Special Citation, and numerous other honors.

What is there new to be said aboutFahrenheit 451?I have written three or four introductions in the past thirty years trying to explain where the novel came from and how it finally arrived.

The first thing to be said is that I feel very fortunate to have survived long enough to join with people who have been paying attention to the novel in this past year.

I've always written at the top of my lungs and from some secret motives within. I have followed the advice of my good friend Federico Fellini who, when asked about his work, said, "Don't tell me what I'm doing, I don't want to know."

The grand thing is to plunge ahead and see what your passion can reveal.

During the last fifty years I have written a short 25,000-word early version of the novel titledThe Fireman,which appeared inGalaxy Science Fictionmagazine, and several years later added another 25,000 words for its publication by Ballantine Books.

Occupying a house with a new baby daughter, we had to consider my trying to find somewhere that was a bit quieter to do my work. I had no money at that time to rent an office, but wandering around U.C.L.A. one day I heard typing in the basement of the library and went down to see what was going on. I found that there was a room with twelve typewriters that could be rented for ten cents per half hour. Excited at the prospect, I brought a bag of dimes with me and moved into the typing room.

I didn't know what the various students were writing at their typewriters and they hardly knew, nor did I know, what I was writing.

If there is any excitement to the novel at all, I think it can best be explained by the fact that every two hours or so during the next week and a half I ran up- and downstairs and in and out of the stacks, grabbing books off the shelf, trying to find proper quotes to put in the book. I am not a researcher and my memory is not all that accurate for things that I've read in the past, so the quotes that you find in the book were those wonderful accidents where pulling a book off the shelf and opening it just anywhere at all I found an amazing sentence or paragraph that could occupy a position in the novel.

This early version took exactly nine days and I spent $9.80 on it, not realizing that the book had some sort of long life ahead.

In the years since its first publication I have written a full two-act play and spent two summers in Connecticut writing an opera based on its text. The book seems to have a life that goes on re-creating itself.

If I try to find its genesis in the years prior to 1950 I would imagine one would turn to certain stories like "Burning Bright" and a few other tales that appeared in my early books.

The main thing to call attention to is the fact that I've been a library person all of my life. I sold newspapers until I was twenty-two and had no money to attend college, but I spent three or four nights a week at the local library and fed on books over a long period of time.

Some of my early stories tell of librarians and book burners and people in small towns finding ways to memorize the books so that if they were burned they had some sort of immortality.

The main surprise for the book occurred when I wrote the short story "The Pedestrian" in 1949.

I had been accosted by the police one night while I walked on a Los Angeles street with a friend. The police wanted to know what we were doing, when walking was our aim and talking occupied us.

I was so irritated by being stopped and asked about walking that I went home and wrote the story, "The Pedestrian," concerning a future where pedestrians were arrested for using the sidewalks.

Sometime later, I took the Pedestrian for a walk and when he turned a corner he encountered a young girl named Clarisse McClellan who took a deep breath and said, "I know who you are from the smell of kerosene. You're the man who burns books."

What a wonderful experience it was to be in the library basement to dash up and down the stairs reinvigorating myself with the touch and the smell of books that I knew and books that I did not know until that moment.

When the first version of the novel was finished, I hardly knew what I had done. I knew that it was crammed with metaphors, but the word metaphor had not occurred to me at that time in my life. It was only later in time when I got to know the word and realized that my capacity for collecting metaphors was so complete.

In the years of writing my two-act play and the opera that followed, I let my characters tell me things about their lives that were not in the book.

I have been tempted to go back and insert these truths in the old text, but this is a dangerous practice which writers must refuse. These truths, while important, could ruin a work done years before.

In writing the play my Fire Chief, Beatty, told me why he had become a burner of books.

He had once been a wanderer of libraries and a lover of the finest literature in history. But when real life diminished him, when friends died, when a love failed, when there were too many deaths and accidents surrounding him, he discovered that his faith in books had failed because they could not help him when he needed the help.

Turning on them, he lit a match.

So that is one of the fine things that came out of the play and the opera. I'm glad to be able to speak of it now and tell you what Beatty had in his background.

After the book was published, in the following years I've had hundreds of letters from readers asking me what became of Clarisse McClellan. They were so intrigued with this fascinating, strange, and quixotic girl that they wanted to believe that somewhere out in the wilderness with the book people she had somehow survived.

I resisted the temptation to bring her back to life in future editions of my novel.

I left it to François Truffaut in his film version ofFahrenheit 451in 1966 to give Clarisse a return to life, even though he had changed her name and given her extra years of maturity, which at the time I thought was a great mistake. But she did survive to the end of the film and at that time I decided that Truffaut was correct.

When I wrote the first version of the play I allowed Clarisse to survive among the book people in the wilderness. The same practice occurred when I wrote the opera.

She was too wonderful a character to be allowed to die and I realize now that I should have allowed her to appear at the end of my book.

That being said, the book is complete and untouched. I will not go back and revise anything. I have a great respect for the young man that I was when I sat down in that basement room with a bag of dimes and plunged into the passionate activity that resulted in the final work.

So here, after fifty years, isFahrenheit 451.I didn't know what I was doing, but I'm glad that it was done.

Introduction for this edition copyright © 2003 by Ray Bradbury